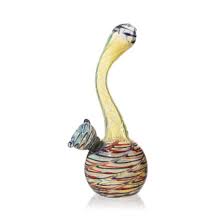 OK, so this is not to say that the author of this piece is a weedhead, or is high on pot while writing this. The opposite may be true, in fact. (He will not confirm nor deny this report.) However, the author can say that he has it on good authority that bongs can be an effective way to smoke weed, but it may be a bit underappreciated these days.

If you have any curiosity about using a bong to get high, we have some guidance to bongs, how they work and how you may incorporate them into your pot-smoking habit.

Maybe it’s appropriate that the history of the bong is a bit clouded in mystery (pun intended). Its origins have been hard to trace, as there are many stories that pop up that make it seem like they are legends. But the word bong seems to come from the Thai word “baung,” which was a pipelike device made of bamboo.

There have been tales of the bong coming from a nomadic group of people who used a pipe-like device in what is modern-day Russia, and similar devices were reported in use among tribes in Africa, and going as far back as the Ming Dynasty in China. Bongs are related to the hookah, which was a device used for smoking flavored tobacco.

Advantages of Using a Bong

The author is told on good authority that smoking marijuana through a bong has its advantages over smoking straight from a pipe or a joint. The water and the percolators in bongs contribute much to the experience.

The biggest advantage with bongs is the cooling and percolation of the smoke in water, as well as the filtering of the smoke. Cooling the smoke and filtering it before inhaling makes for a smoother, calmer draw no matter how much smoke you take in. The cooling effect can spare your throat and lungs from harsh heat sensations (like the summers on Long Island), as well. This can contribute to a purer, easier and more enjoyable experience.

What are the Bong Parts?

If you interesting I buying or perhaps creating your own bong (lots of people can create one out of almost any material they have in their house), it will be good to know the various parts of a bong so you can know how much material you need to make an effective bong.

Bongs are just another tool to consume cannabis. Bongs can be an artful science, or a scientific art, depending on how you choose to look at them. There are several designs, many materials and some features that are unique to certain types. If you don’t like the dry heat intake of a joint or pipe, but you enjoy inhaling the smoke, a bong can help make the entire experience more enjoyable.