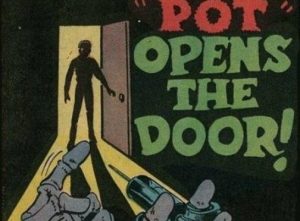 Before you can answer this complicated question in any meaningful way, it stands to reason you might want to define the term “gateway drug” and determine where and under what circumstances it was coined. A gateway drug refers to any drug that might lead the user to take additional drugs down the road, most usually ones that might cause serious damage to oneself. In the 1930s, similar theories were called the stepping-stone theory, progression hypothesis, or escalation hypothesis. All of them pretty much mean the same thing. The gateway drug theory didn’t really gain steam until the drug war began.

Opponents of the ideas behind the gateway drug theory contest that it shows only statistical succession, but not causation. In other words, while users of one drug might be more likely to move on to another, that doesn’t necessarily mean the empirical data exists to prove that the drug itself led the user to move on to more serious drugs in the future. After all, most people might start drinking coffee before drinking alcohol or smoking pot, but if you popped the idea that caffeine is a gateway drug, you probably wouldn’t get taken very seriously. That’s basically where the science is at right now.

Instead, opponents argue, it’s more likely that people themselves are more likely to do a variety of drugs based on environmental, biological, or genetic factors. Although these arguments most likely have a lot of merit, it hasn’t stopped politicians (most usually opponents of pot legalization) from using the term gateway drug when referring to marijuana.

That probably doesn’t come as a huge surprise to most of us.

A publication of the National Epidemiological Study of Alcohol Use and Related Disorders discovered that many pot-smoking adults were at an increased danger for developing an alcohol disorder, while many of those adults who already suffered from an alcohol disorder ended up with further deterioration after using marijuana. Again, it should be noted that studies like these show events in succession without proving what caused them.

Another study shows that cannabinoids in young rodents affects the reward centers of brain dopamine as they grow and age, evidence that pot is indeed a gateway drug (in rodents, at least). Although this is not proof that the same reaction might occur in human adolescents, it could explain why a person who begins using marijuana from a young age is more likely to advance to harder drugs in adulthood. More studies are needed.

It should be noted that most people who choose to smoke marijuana never become addicted to more dangerous drugs. It’s also important for people to realize that while marijuana might affect dopamine centers, alcohol definitely does. To call one a gateway drug based on as-of-yet unproven effects while refusing to acknowledge the proven effects of another dangerous substance is perhaps irresponsible–or evidence that political posturing is more important than real science. Most people will inevitably choose to believe whatever they want to believe, but more information is needed before any definite conclusions can be made by one side or the other.