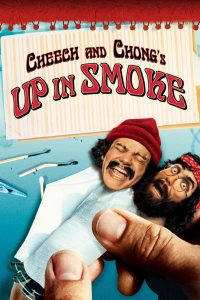 Whether you enjoy marijuana if your state permits the use of it legally, or you simply enjoy watching iconic movies on websites, Hollywood has definitely put their spin on the stoner film. There is much debate over what classifies a film as a “stoner film“. Some argue that it must be about Marijuana, while others argue that it needs to be a good movie to watch while “high”. Nonetheless here is our list of our top stoner films:

One of the best stoner movies of all time is Cheech and Chong’s “Up in Smoke.” This film follows two stoners who unintentionally end up smuggling a van made entirely of marijuana from Mexico to Los Angeles. Unbeknownst to them, they have an incompetent Sargent on their trail. Laughter ensues!

The film is one of my personal favorites and one that sparked a love for Cheech Marin and Tommy Chong’s work together. On Internet Movie Database (www.imdb.com), the Up in Smoke has garnered a 7 out of 10 rating. Definitely worth a watch.

Another excellent stoner movie? “Half Baked!” This film follows four friends with a huge love for smoking pot. When one of the four ends up in jail, the other three come up with lots of crazy schemes to bust him out.

Starring Dave Chappelle, this movie is a gut-buster no matter if you enjoy marijuana or not. I definitely recommend it for a wonderful evening of laughs! IMDb rating: 6.7 out of 10.

This film is truly one of the best and sports an impressive cast as well. When “The Dude” (played by Jeff Bridges) is erroneously thought to be millionaire Lebowski, two thugs wind up destroying his rug. Seeking retribution, The Dude enlists help from his bowling buds in order to get exactly that.

“The Big Lebowski” is a hugely hilarious film and one that definitely deserves to be watched. Jeff Bridges and John Goodman really breathe life into this movie, and it’s one that will keep you laughing from start to finish. With an IMDb rating of 8.3 out of 10, The Big Lebowski has definitely earned its spot on the list of best stoner movies of all time.

Fourth on the best stoner movies list? “Grandma’s Boy!” This movie follows a 35-year-old tester of video games and what happens when he is required to move in with his grandma and her two roommates. Some of the funniest clips involving the use of marijuana are present in this film, so if you are looking for a fantastic stoner movie to watch over the weekend, give this one a try. IMDb rating: 7 out of 10.

Hollywood has provided us with many wonderful stoner movies. Some honorable mentions include “Pineapple Express,” “Harold and Kumar Go to White Castle,” “Dude, Where’s My Car?”, “How High,” and “Cannabis Kid.” So if you are looking for the perfect film to kick back and smoke some pot with, put in any of the movies we mentioned above or check out this cool list from WatchMojo: